JACKSONVILLE, Fla. – Sparked by a second half rally and a handful of highlight reel goals, the Jacksonville University men’s lacrosse team was unable to overcome a strong first quarter from Marquette as the Dolphins ran out of time in a 14-12 decision, Friday evening at D.B. Milne Field.

“I left the locker room tonight upset and frustrated with myself that I haven’t done enough to get our team over the hump. Our group is talented, athletic, and has unbelievable potential for this season,” stated head coach John Galloway following the loss. “It is on me to make sure they trust me and I have failed to do that in the first three weeks of the season. Instead of harping on our players, I am going to take a good look in the mirror to figure out what we need to do to be successful. The story of the season has just begun.”

Marred by a trio of penalties in the opening quarter, the visiting Golden Eagles found a way to capitalize on the extra-man opportunities early with a 6-1 head start after the first 15 minutes.

Willing a spark in the Dolphins’ offense, Evan Tyler had a hand in all three of JU’s first half goals. The junior captain posted Jacksonville’s lone goal in the first quarter with 8:22 showing, before he dished a pass to sophomore Jeremy Winston with 8:16 in the second quarter to make it a four-goal game, 6-2. Tyler then finished a shot with 1:52 left in the half to keep the differential heading into the locker room, 7-3.

The hosts came out of the locker room inspired and outscored Marquette 9-7 in the second half. As a Golden Eagle cross-checking penalty carried over into the third quarter, sophomore Jack Dolancapitalized on the chance just 17 seconds into the third. He added a second tally just 2:27 later to make it a two-goal game, 7-5.

Perhaps the most impressive finish, however, came just over a minute later as senior captain Eric Applegate found Will Burckley behind X. The sophomore fed freshman Bo BowHunter in front of the cage, who then buried a snapshot-worthy behind-the-back shot past Marquette’s keeper to bring the game within one. 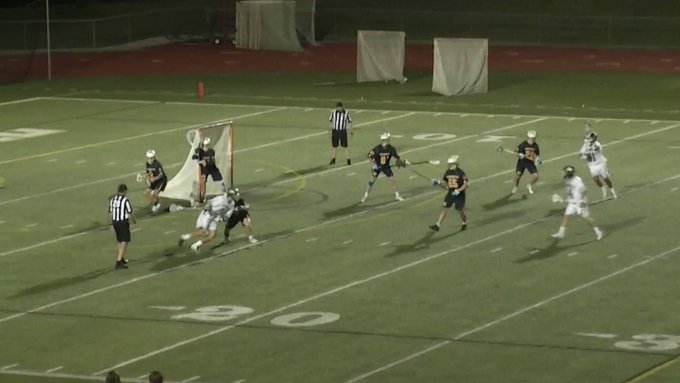 BowHunter returned the favor and found Tyler with 9:15 showing – an answer to a Golden Eagle goal less than a minute prior (10:21). As Marquette fought to stay ahead, Tyler (5:35) and Dolan (3:02) posted back-to-back goals in the waning minutes of the third – solidifying Dolan’s hat trick in just 11 minutes and 40 seconds – as JU curbed a three-goal run from the visitors, 11-9.

As it turned out, luck was on Marquette’s side as the visitors recorded the final tally in the third with four seconds remaining and the opening mark of the fourth, just 15 seconds in, for a 13-9 advantage. Not to be deterred, the Dolphins again answered back – this time with three of the final four goals from freshman Jack Pucci (13:01), junior Alec Drosos (4:59) and Tyler’s fifth goal of the game (3:03). Despite battling to the final whistle and testing MU goalie John Hulsman with a pair of shots in the final 10 seconds, Marquette managed to escape Duval, 14-12. Tyler finished the day with a career-high six points.

“Tonight we were out-coached by Coach Amplo and his staff. They have built a culture of toughness and buy-in, and we will learn from their blueprint,” added Galloway. “With guys like Dixon Smith, Evan Tyler, and Jack Dolan leading us, I know our future will be bright. Now it is time for us to prove it.”

The Dolphins next test comes against Michigan next Saturday, Feb. 23 in the 2019 Moe’s Lacrosse Classic. The game will be broadcast live on CBS Sports Network, and tickets are available at JUTickets.com. Opening face-off is slated for 11:30 a.m.